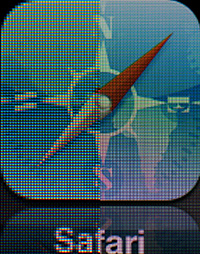 The more I use my new iPad, the more I notice non-retina graphics. We’re spoiled by the many native apps with retina graphics, that when we browse the web, it feels like a second class citizen. It doesn’t have to. This problem isn’t going away, either. I bet we’ll start seeing retina displays in MacBooks pretty soon, and maybe even glorious 27″ retina cinema displays, too. But, even with just the iPhone 4, 4S and new iPad, we’ve got a lot of devices receiving subpar content.  Let’s fix that.

So, seeing no good solution, I stopped looking, until today, when I was browsing the web on my iPad, coming across site after site serving me terrible, blurry, non-retina graphics, and I decided to solve it.

My solution is to figure out which image to serve server-side.  This means our code doesn’t specifically request a retina graphic (either in CSS with a media query, or in JS when it’s swapping them out).  This doesn’t come without its own pitfalls, which I’ll discuss in a bit, but I’d say this is the best solution that we have today.

The idea is to set a cookie with the devicePixelRatio early on (in the head), then serve retina graphics to those clients.  Here’s the JS:

And here’s my nginx config for our WordPress site:

This is basically looking for requests for files in our theme’s img directory, and trying to serve the same image in the img-2x directory. If it’s not there, no problem, fallback on the original image. This allows us to build an independent directory tree of just retina graphics. I think this is a better approach than how it’s done on iOS, which is by appending some special identifier to the filename (iOS uses filename@2x.ext).  You could easily modify that regex and organize your graphics however you’d like and to use whatever path you’d like.

While devicePixelRatio’s greater than 2 aren’t in consumer electronics just yet, they probably will be at some point in the future.  We could easily modify this to serve images from an img-?x directory, or if you prefer filename identifiers, you could use @?x or so.  So, with a little tweaking, this should work forever.

But this isn’t perfect.

We need JavaScript, we need cookies, and we need that JS snippet to run on every page the user might visit.  There are ways around this:

I think we need a header.  If all browsers on retina devices sent a special header, saying “hey, serve me retina graphics”, we could handle this entirely server-side.  Here’s why this would be great:

So, there it is.  It’s in use on this site right now (just for our logo, until I can round up some higher resolution versions of the other graphics we’re using around the site).  Check it out.  We have an awesome responsive design that looks great on the iPhone and iPad in both portrait and landscape orientations.  If you’ve got a better solution, feel free to leave it in the comments.